Have a Question? Click To Chat
Book Online
Limited Spaces Available! For reservations call 888-557-3330. Spaces are extremely limited this time of year so book early to ensure the date you want.
Click Here To Book Now

Join us aboard our fully-outfitted cruise ship, the Sunrider, for an incredible excursion past the panoramic coastal sights along the Sea of Cortez to Bahia Santa Maria (Santa Maria Bay). The pristine Marine Sanctuary of Santa Maria Cove is an excellent location to go snorkeling, swimming, and sunbathing. The sixty-foot-long Sunrider has ample space with room for sixty-five guests. The SunRider disembarks from the docks in the downtown Cabo San Lucas Marina to cruise by some of the most picturesque natural landmarks in Los Cabos, including Lover's Beach, Pelican Rock, the Sea Lion Colony, Poseidon's Arch, Pirate's Cave, and Land's End. Pelican Rock is known as one of the most popular scuba diving sites in the region. At the Sea Lion Colony, you will spot loads of these social aquatic mammals catching some rays on the granite shoreline. Poseidon's Arch, a natural archway carved out of the rock by centuries of wind and water, is probably the most iconic symbol of Cabo San Lucas. Be sure to bring along your camera to click some pics of this amazing coastal landscape.

After going by the rock formations at Land's End, the SunRider will cruise beside Golden Corridor in the Sea of Cortez to the gorgeous government-protected marine preserve at Santa Maria Cove, where you can relax on the sand, swim in the pleasant waters or snorkel above a breathtaking coral reef in the cove. The serene waters of this cove are idyllic for snorkeling because of the clear water and the large population of aquatic species that flourish in this environment.

After exploring the cove while snorkeling, you can sip a tropical cocktail from the SunRider's open bar and relax on the upper deck. The SunRider has ample amenities including fresh-water showers, restrooms, and a complete kitchen, where our staff will prepare a scrumptious Mexican buffet.

It is your responsibility to make sure you are aware of and understand all restrictions pertaining to this tour before booking online or over the phone. It is your responsibility to ensure that you are medically qualified and within any limits listed below in order to participate in this activity. No refunds will be given to those who reserve a spot and can not participate due to the restrictions listed below. For more information please read our cancellation policy and terms and conditions page or call our staff with any questions regarding your ability to participate. 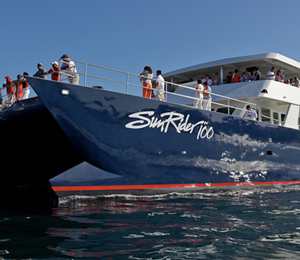 Cabo Tour Center is always interested in your tour experience with us. We hope you enjoyed your tour and love to hear comments.

I have been to the Bahamas many times, but SunRider Snorkeling Cruise is one of my favorite trips! It includes everything that everyone should do here. As a Bahamas veteran, I can say only the best about this experience!

Thanks to the professional guides! I was a bit worried about kayaking because I had never done it before, but the instructions were great and I had such a good time!